Meet the Commission for Saskatchewan. Every commission has three members: a judge appointed by the Chief Justice of the province and two other members appointed by the Speaker of the House of Commons. Their role is to review the federal electoral boundaries for their province.

Justice Georgina R. Jackson received a Bachelor of Arts (1973) from Campion College and an LL.B (1976) from the University of Saskatchewan. She was admitted to the Saskatchewan bar in 1977. Immediately prior to her appointment to the Court of Appeal, Justice Jackson was a partner with MacPherson, Leslie and Tyerman, having previously served as a Crown Counsel and then the Master of Titles and Executive Director of the Property Registration Branch with the Saskatchewan Department of Justice. During her legal career, she was the President of the Uniform Law Conference of Canada and the President of the Saskatchewan Branch of the Canadian Bar Association. She was appointed Queen's Counsel in 1991.

Justice Jackson was appointed to the Court of Appeal for Saskatchewan in 1991. During her judicial career, she has served in a volunteer capacity with many legal and judicial organizations. She was a co-chair of the National Advisory Committee on Judicial Ethics, and has written and lectured extensively on that topic. She wrote a judicial ethics training program for new judges in Morocco, and taught annually for many years at Germany's Judicial Academy (Deutsche Richteracademie). Justice Jackson has organized numerous national seminars for judges, on behalf of the National Judicial Institute of Canada. She is a Past President of the Canadian Institute for the Administration of Justice and has held a variety of other board positions. She has written a number of manuals and articles and speaks regularly on a variety of legal topics. 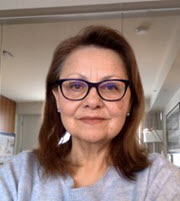 Bonita Beatty is an associate professor in the Department of Indigenous Studies at the University of Saskatchewan and was its undergraduate chair. She holds a PhD in Political Science from the University of Alberta. She has over twenty years of prior public service experience in northern policy, community development, and First Nations health management and governance. She was a former Executive Director of the Peter Ballantyne Cree Nation Health Services, and former Executive Director for Health and Social Development, Federation of Sovereign Indigenous Nations, and former Senior Policy Analyst for the north with the Saskatchewan Indian and Metis Affairs Secretariat. She was a founding member of the former International Centre for Northern Governance and Development (ICNGD) at the University of Saskatchewan, and a graduate chair of its masters in northern governance program. Her research focuses on northern and Indigenous political engagement, governance, public policy, and health. Findings from her research project on northern political culture and engagement in 2012 suggested that northern Indigenous peoples had the strongest patterns of community and political engagement at the Band and community levels, with varying patterns in provincial and federal elections. Northern youth advocated for accessible engagement opportunities. Her other research addresses northern public services including senior/elder care, renewable energy, and health systems. She presented on Long-term Care on reserves before the Standing Committee on Indigenous and Northern Affairs in 2018. She is currently a Fulbright Arctic Initiative scholar with a focus on northern and Indigenous collaborations addressing health and infrastructure. She is a member of the Peter Ballantyne Cree Nation.

Mark Carter has been a professor at the University of Saskatchewan's College of Law since 2001. He holds a BA, an LLB, and an LLM from that university. He is a member of the Manitoba and Saskatchewan bars. Prior to teaching at the University of Saskatchewan, he taught at Simon Fraser University's School of Criminology. His work is primarily focussed on constitutional law, legal theory, human rights, and criminal law. His publications have appeared in law journals including the Queen's Law Journal, the Journal of Parliamentary and Political Law and the Saskatchewan Law Review.